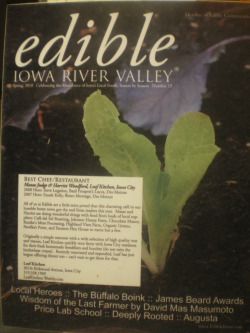 All of us at Edible are a little extra proud that this charming café in our humble home town got the nod from readers this year. Masae and Harriet are doing wonderful things with food from loads of local suppliers: Café del Sol Roasting, Johnson Honey Farm, Chocolate Manor, Ruzika’s Meat Processing, Highland Vista Farm, Organic Greens, Pavelka’s Point, and Farmers Hen House to name but a few.

Originally a simple tearoom with a wide selection of high quality teas and tisanes, Leaf Kitchen quickly won favor with Iowa City residents for their fresh homemade breakfasts and lunches (do not miss the buckwheat crepes). Recently renovated and expanded, Leaf has just begun offering dinner too – can’t wait to get there for that. 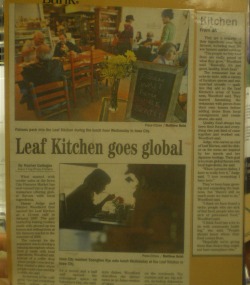 What started with cookie sales at the Iowa City Farmers Market has now turned into a 32-seat restaurant offering global flavors with local ingredients.

Masae Judge and Harriet Woodford first opened the Leaf Kitchen as a 12-seat café in January 2007. The pair started by baking cookies made with ground up tea leaves and selling them at the farmers market in the summer of 2006.

The concept for the restaurant was to develop a relaxing atmosphere where food is made with local ingredients, Woodford said. Instead of a coffee shop where people come and go, they wanted a place where people could come and stay a while, she said.

As interest in the café grew, "we had everything there telling us to expand," Woodford said.

They closed the café for a month and a half and opened the redesigned space on Valentine's Day, she said.

With more seats, they now offer a dinner menu of small-plate, izakaya-style dishes. Woodford describes the dinner menu as an Asian version of tapas.

During the day, they offer a lunch menu during the week and brunch on the weekends. The cookies still are big sellers, including shipments overseas and sales at the farmers market, she said.

They get a majority of their ingredients from local farmers, including their fellow farmers market vendors.

"The people we buy food from are really proud of what they grow," Woodford said. "Basically, it's just good, healthy, fresh food."

The restaurant has an eclectic style, with a variety of furniture pieces and mismatched utensils -- qualities that add to the Leaf Kitchen's sense of hominess, Woodford said. They started furnishing the restaurant with pieces from their own homes before adding items from local consignment and resale stores, she said.

Quality food always has been their focus and everything else just kind of came together and worked out, Woodford said.

Judge, who serves as chef of Leaf Kitchen, said the dishes on the menu are inspired by her travels and her Japanese heritage. Their goal is to create global flavors with local ingredients, she said.

"When I present dishes, I have to really love it," Judge said. "I love everything I have here."

They've been busy growing and expanding the business, but "there's still so much more we want to do," Woodford said.

"I think food has a lot to do with community building," she said. "People should know where their food comes from."

"Hopefully we're giving them that choice they might not have someplace else," she said.